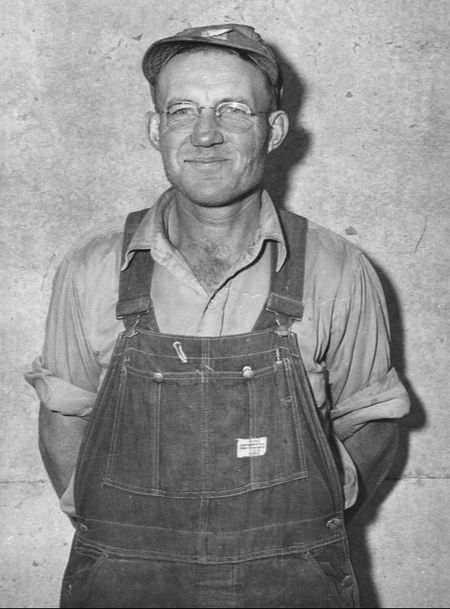 His father purchased the family farm after Troy’s grandfather’s death; land which was part of the family farm since the 1800s. Troy and his parents moved there when he was 9 years old. Troy and Wilma lived in the family farmhouse until they finished building their own house closer to the main road, which they moved into in 1946. Most of the work on the house was done themselves, and with the assistance of friends and family. It was in the house that Troy had built that he passed away, his only love at his side.

Employment:  Troy was a farmer and carpenter, delivered furniture, worked as a service station attendant, newspaper delivery supervisor. He retired on 21 September 1977 from the District of Columbia Government as a foreman within the Department of Highways and Traffic.

Close Family also in the Same Cemetery:  Troy and Wilma (after her death) will share a plot and headstone, buried in the Garden of Gethsemane. Also buried in this cemetery  are: Wilma’s brother and two sisters, and their spouses — Roy and Mirate, Ida and Clarence, Ruby and Raymond; her niece and her husband, and nephew — Patricia and Denzel, Raymond Jr. 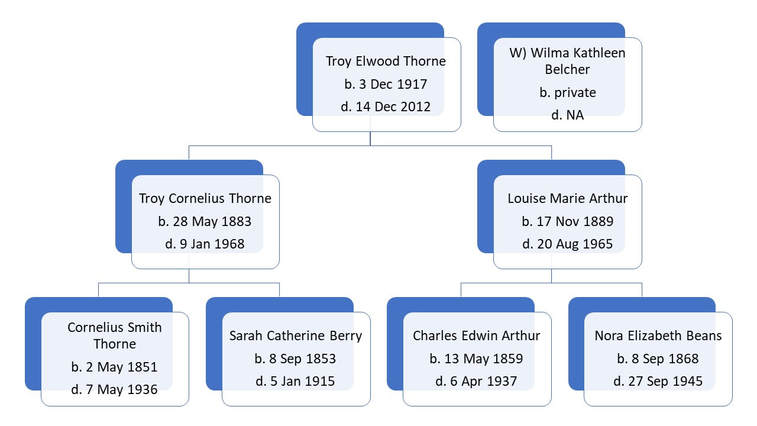 Eulogy read by his granddaughter at his funeral
:
First, I would like to thank everyone for being here today to pay tribute to my grandfather, Troy Thorne. For those of you that don’t know me I am Crissy, the daughter of his oldest son Sam.  Pop would be pleased to see so many of his family and friends here today.  Whether you knew him as a husband, father, grandfather, uncle, friend, as Troy, TY, Thorny, Dad or Pop, you probably had the same level of appreciation for him that I did.

My grandfather was a great man.  When I think about him the words that come to mind are:  hard working, caring, faithful, respectful, storyteller, jokester, craftsman, provider and family man.  It is impossible to summarize how great a man he was in words, but these are just a few that come to mind.

Troy Elwood Thorne was born on December 3, 1917, the only child of Troy C. and Louise Thorne.  He has lived his entire life in this area.  They moved to the farm his father was raised on at age 9, where he also passed away peacefully last week.

An active and hard-working youth, he would feed the animals, plow the fields with a team of horses, as well as attend school.  He was fun loving and a bit head strong.  An example of this was when in his early teens, after having a hernia operation, he took a wheelchair to the furnace level of the hospital, out the door, and across the street toward a Peoples Drug Store to buy ice cream.  He was caught by a nurse because he wasn’t able to get the wheelchair back on to the curb in front of the store.

After graduating Oxon Hill High School in 1936, in a class of 13 students, he worked the family farm while also driving a dump truck and delivering merchandise for Miller’s Furniture Store.  He later worked for the Washington Post and eventually the Bridge Division of the DC Government where he reluctantly retired in 1977.

In 1941 his best friend married a girl from West Virginia…who just happened to have a younger sister named Wilma, who he has said was the girl of his dreams.  After driving to West Virginia once a month for a year, they were married on December 3, 1942.  Together they went on to build a house on his parents’ land, where they spent 70 wonderful years together…raising 6 children and a grandchild.

Once Pop was retired he spent most of his time woodworking.  He was good at it…really good at it.  He could fix or build anything.  Trailers of all sizes to use around the farm, furniture, cabinets, rocking horses, rocking chairs, doll cradles, kitchen tables, benches, desks, porch swings, clocks.  The list could go on forever.  If he saw something, Grandma suggested it, or he heard anyone of us say we might need it, the next time he saw us it would be there waiting.  The one thing he didn’t know was how to just make one of anything.  He once made Grandma a stool to use and several of us admired it…so before you knew it we ALL had stools.  Long stools, short stools, heart shaped stools, step stools.  He made things for us, for extended family, for family friends, church bazaars…for anyone and anything that you could think of.

Although an only child, he grew up with numerous cousins nearby.  He loved that he had his own big family, and loved sharing his life stories and jokes.  After you’d heard them 100 times you could finish them yourself.  If you don’t believe me ask any one of us about hanging a man with a wooden leg, what goes around a butt’n, being named after George Washington, or about wise old owls.  He actually enjoyed his joke being finished by us more.  He’d get a wide smile and an almost “I’m proud of you” look on his face, which was matched only by his “I’m going to do something that I’ll get in trouble for” look (because he was about to do something to Grandma before she noticed).  The jokes, the stories, the family trips, the funny things and lessons he taught we will always remember…those looks we will truly miss.

​Of all the things Grandma and Pop taught us, they instilled the importance of faith and family, of giving back and doing for others, the importance of hard work, the attention to detail, and to live your life with integrity.  He was always ready to help someone out…to chip in, to help rebuild, to give comfort as best he could.  He cheered us on when we accomplished even the smallest achievement.  He gave without wondering what he’d get in return.  A rare character indeed…the world could use more people like this.  He gave love and showed love…he was amazing.
​
So to Pop, on behalf of your family and friends, I want to say thank you for being such a wonderful person.  We thank you, we appreciate you, we respect you, we miss you and we love you so very much.  Thank you for everything.