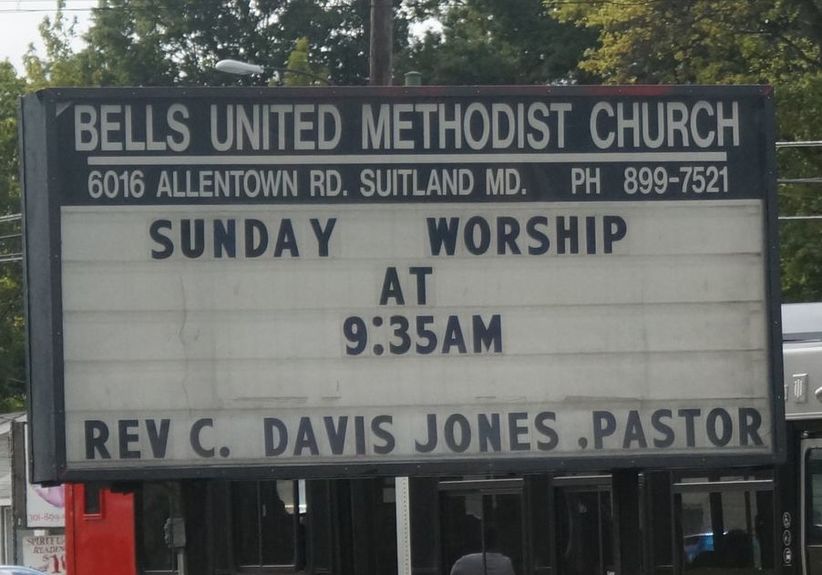 In 1849, an acre of land was donated by Henry and Mary Tolson to build the Beale’s (or Beall’s) Chapel. The log church was destroyed by fire in 1869. A second building was erected in 1870; both structures were built where the cemetery is now. A larger building was built closer to the public road, and was dedicated on July 3, 1910. In 1931, Bells became a station and was granted the privilege of retaining the Camp Springs charge name. The present sanctuary was concentrated April 4, 1954 beside the third structure.

Bells Methodist Church is a large frame gable-roofed church building, typical of this early twentieth century type. Entrance is through paneled double doors centrally located in the north gable end. Above the doors is a gothic-arched transom filled with stained glass; and above this a small round stained glass window. On each side of the central doors is a gothic-arched stained glass window. Built into the northwest corner is a tall bell tower, with pointed-arched openings on all four faces. The sides of the church are four bays long; all windows are gothic-arched, double sash, filled with stained glass. The interior features a decorative molded tin ceiling and wainscoting. The building is covered with white asbestos shingle, foundations are of poured concrete. South of the church, is a cemetery with headstones as early as from the mid-nineteenth century.

Around 1980, the Naylors and Entwisles began working on the cemetery grounds and records. They used the Daughters of the American Revolution listings, Sexton Records of Interments, and memories of older church members to uncover headstone and graves long forgotten.