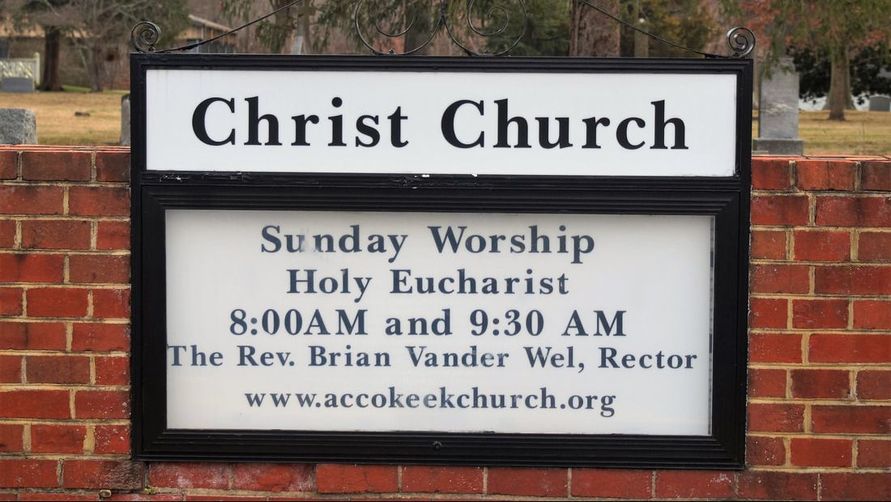 Christ Church at Accokeek is a high one-story, rectangular brick structure with a gable roof. There is a small entry vestibule on the south side, a low rectangular cupola surmounted by a cross at the west gable peak, and a gable roof sanctuary projecting from the east gable end. The church stands on a 12 acre parcel accompanied by a ca. 1970's brick school building and a ca. 1930's frame Rectory, at the intersection of Farmington and Bryan Point Roads. The west gable end, fronting on Farmington Road, has a centered tripartite window of diamond-paned glass with wooden muntins. The main block of Christ Church is laid in Flemish bond. The roof is slate covered. The ornate cornice has a wide wooden frieze with brackets supporting the overhanging ogee molded cornice. The west gable end is surmounted by a rectangular wooden cupola with a pyramidal cap. The five bay south facade has the main entry in a small gable roof wooden vestibule in the west bay. There are four high diamond-pane casement windows on the main block. Each has a round-arch head with a wide flat hood mold. The interior of Christ Church has a rectangular plan and contains primarily the large open nave and sanctuary. Flooring at the front and rear and in the center aisle is covered with hexagonal brick tiles. The roof trusses, painted or stained a dark brown are exposed.

Christ Church, Accokeek, began as a Chapel of Ease under the sponsorship of St. John’s Church, Broad Creek, in the year 1698. In 1823, Christ Church was recognized as a separate congregation. In 1843, the family of William Lyles deeded the southern section of “Cherry Mount” to the Vestry for $75.  It survived the presence of British troops in the War of 1812, and the occupation by the Union Army in 1861-1865.

The oldest legible grave is dated 1775, one in 1783 and another 1797; they were moved close to the entrance door for protection. The original cemetery is located immediately adjacent to the church and extends southward to the gravel drive leading from the blacktop parking lot to the Rectory, and eastward to the Parish Hall. All records of this section were lost in the Rectory fire on November 29, 1929. The second and newest section of the cemetery was laid out thereafter, and is the area in which site are still available.

Family buried at the Christ Church cemetery include: