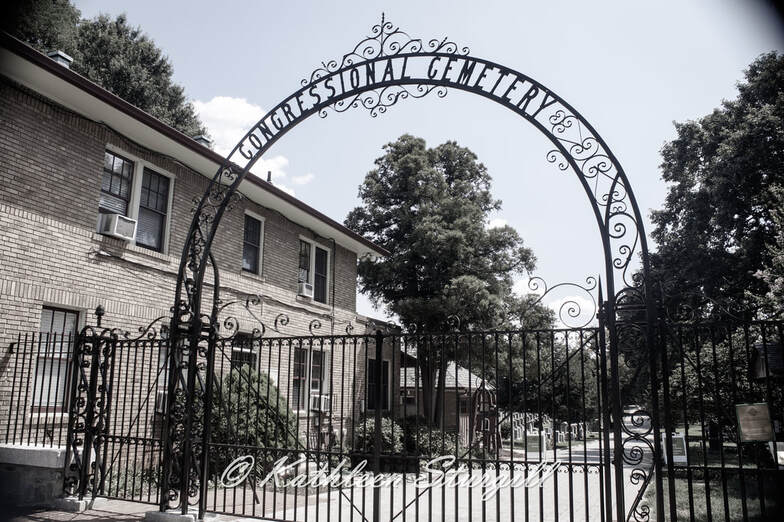 Historic Congressional Cemetery has been a final resting place for Washingtonians for over 207 years. In 1790, the ten mile square along the Potomac River was chosen for a new federal District and Pierre L'Enfant mapped out a city plan by 1792. Despite elaborate planning for the new capital, no provision for burial grounds was made on any of the various city maps of the 1790s. In 1798, the commissioners of Washington set aside two squares on the borders of the city-one meant to be the eastern burial ground and one the western. However, the eastern square was prone to flooding and was not a good choice for a cemetery. The residents of the eastern section of the city formed an association to secure a more suitable location. Most of the members of the association were also members of the Christ Church, Washington Parish vestry.

The association chose a 4.5-acre square between E and G Streets and 18th and 19th Streets SE. The articles of subscription, filed on April 7, 1807, stipulated that the grounds were to be laid out in three-foot-by-eight-foot sites that would be offered for sale at $2 each. The proceeds would pay for the $200 cost of the square and for a post-and-rail fence to enclose the grounds. The articles denied burial to "infidels," and persons of color could not be interred within the area enclosed by the fence, and the graveyard would be turned over to Christ Church as soon as it was debt-free. The last debt was paid in early March 1812, and the deed and plan of the graveyard were turned over to Christ Church on March 30, 1812, when it was officially named Washington Parish Burial Ground.

The cemetery almost immediately became associated with the U.S. Congress, becoming the first national cemetery (50 years before Arlington was created in the late 1860s). In 1807, only 3 months after the first burial (Capitol stonecutter William Swinton), Connecticut senator Uriah Tracy died; the new cemetery was the logical place for his interment. Until the mid-1830s, practically every Congressman who died in Washington was buried in Congressional Cemetery, marked by cenotaphs designed by famous architect Benjamin Henry Latrobe. In 1816, as a gesture of goodwill (and perhaps as a matter of good politics), the vestry of Christ Church set aside 100 burial sites for the interment of members of Congress-a privilege extended to their families and other government officials in 1820.

Additional sites were donated to or purchased by the government, which eventually owned nearly 1,000 sites. Over the years, the property grew to encompass 35 acres and became known as Congressional Cemetery. Christ Church still owns the property, which is administered by the nonprofit Association for the Preservation of Historic Congressional Cemetery. It is the only place in Washington where one can be buried in a site directly on L'Enfant's 18th-century city plan. If a visitor stands just inside the old iron gate at the top of the property and faces south toward the Anacostia River, he or she can imagine it is 1807, when the cemetery was founded.

It was not always this way. For a time in the 20th century, Congressional Cemetery was forgotten and neglected. The grass grew waist high, the stones crumbled and toppled, and the back corners of the property were dirty and dangerous. By 1997, Congressional Cemetery had the dubious distinction of being added to the National Trust for Historic Preservation's list of the most endangered historic sites.

A stubborn group of dedicated Washingtonians knew the cemetery was worth saving. Local Capitol Hill neighbors who walked their dogs on the grounds began taxing themselves to pay for grass mowing. Today, the K9 Corps at Historic Congressional Cemetery has hundreds of members who pay an annual fee to walk their dogs off-leash on the grounds. Their resources and volunteer work keep the cemetery clean and secure as well as lively and well loved. Other volunteers-including members of the armed forces, school groups, church groups, service associations, and descendant organizations-put in thousands of hours of work each year. They accomplish tasks the cemetery could never afford to pay for. Private donations, Congressional appropriations, foundation grants, and proceeds from gravesite sales have all allowed the cemetery to rebound from neglect and vandalism.

Now a National Historic Landmark, Congressional Cemetery is flourishing. The brick pathways and slate walks are restored to their original beauty. New trees are being planted and new gardens bloom. The cemetery stages regular educational events, tours, fundraisers, and even 5k races. Marching bands, including the world-famous US Marine Band, regularly play at the grave of John Philip Sousa. Genealogists, photographers, historians, dog walkers, birders, joggers, anthropologists, and Victorian scholars can all find something to love among the old stones.

And as an active cemetery, Congressional boasts some new stones, too, many of which are creative and surprising. Congressional Cemetery has seen the federal district along the Potomac River grow into a busy modern city. Washington, DC, now fills 61 square miles with 600,000 residents. As it enters its third century, the history of the city-and, indeed, the United States-will continue to be written on the stones of Congressional Cemetery.