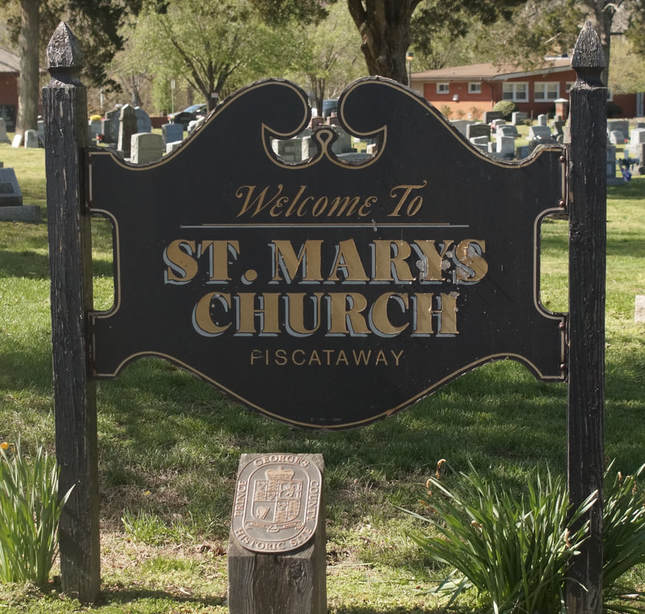 Prior to the building of the Catholic church at Piscataway, the congregation worshipped about three miles away at Mattawoman Chapel on Mattawoman Creek on the Middleton farm. During the Colonial period, Catholic activity in Maryland had been greatly suppressed, and accounts of the period are scarce. Colonials that attended services other than at the Church of England had to pay a tobacco tax and could not own property as a church. Wealthy Catholic families, such as the Middletons, built chapels on their plantations and allowed other Catholics to worship there when a priest passed that way.

After the Revolutionary War, William Diggs bequeathed to his friend John Carroll a one-acre tract in the Piscataway region “on which a chapel now stands.” The exact site is unknown, and the John Carroll referred to is believed to have been the priest who later became the first Catholic Bishop of the United States.

The first Piscataway Catholic church was begun in 1838 and took seven years to build. It was in the center of town, a few hundred feet from the Piscataway creek and its then wharf. The foundation and main structure were brick. The church and its steeple were a landmark of Piscataway for more than 60 years, including the Civil War years. Although there were sleeping quarters attached in the rear of the church, there was not a resident pastor until the close of the 19th century. The official registers of St. Mary’s began in 1874, indicating that religious services were held on a fairly regular basis from then.

St. Mary’s Church faces Piscataway Road and open fields to its east. It is a one-story, six-by-three bay brick structure with a three-bay gable end entrance facade marked by a projecting tower emerging from the central bay. Gothic in style, the church is rectangular, of American bond brick work with a low watertable. Entrance is through the east two-story tower, which has a plain frieze, a crown molded cornice and a pyramidal roof. The double, 12-panel entrance door is surmounted by a pointed arch lintel, and flanked by buttresses at the tower corners. A foundation block reads “St. Mary’ s AD 1906” Above the entrance is a pointed arch stone plaque reading “Come to me all you that labour and are heavy laden and I will refresh you, 1838”. At second-story level is a sealed window, having pointed-arch tracery. The tower is flanked by doors on the main block, each six panels with a pointed-arch head, surmounted by a lintel. Buttresses mark the corners of the building. There are overhanging eaves with projecting rafters on the north and south facades. Both facades are six bays, marked by pointed arch stained glass windows. Buttresses mark the intervals between the windows. The north side of the tower has a round rose window. The west (rear) facade is marked by two six-panel doors with pointed arch heads surmounted by pointed-arch brick lintels. A small stone plaque centered in the gable reads “ IHS”• There are graves surrounding the church building and several large cedar trees cluster in the cemetery that surrounds the church. Grave dates range from 1841 to 1982. A modern brick building, the St. Mary’s Elementary School, is to the west.