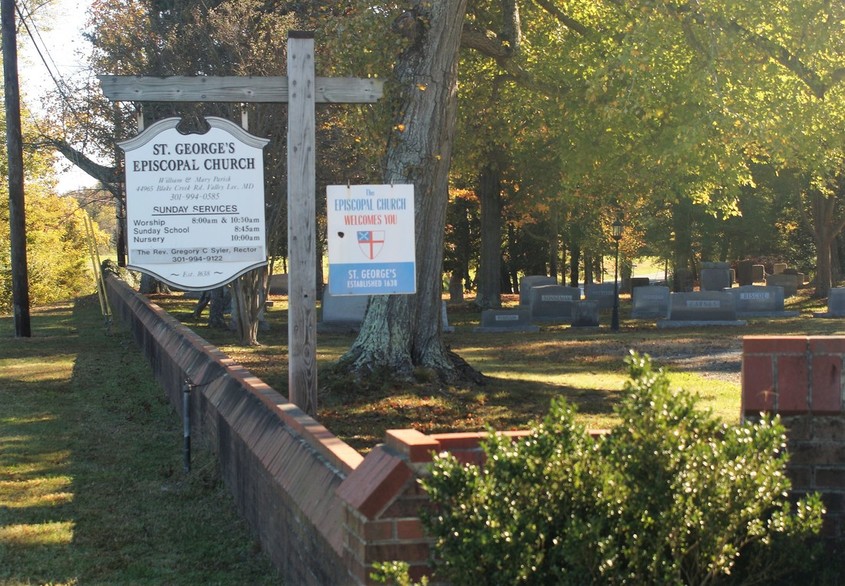 The existing St. George's Protestant Episcopal Church was built in 1799 and it is the fourth to serve the William and Mary Parish. Of the three buildings which preceded the present structure, two were built on this same site, one about 1692 and another about 1760; the original, c. 1638-1642. A pleasing example of rural Southern Maryland, late-18th century ecclesiastical architecture, the restored church is attractively situated within the boundaries of an old interesting cemetery. Both the cemetery and church are shaded by numerous large oak trees--several of these predating the first building. St. George's is a one-story, rectangular, gable-front, Flemish bond brick structure, five bays in length at both side elevations. The facade is at the west end and is three bays in width. The entrance consists of a central double door, which is flanked by rectangular stained glass windows. A bullseye window pierces the gable above the door. All of the exterior detail, including the molded architraves and denticulated eave cornices, appear to be a combination of 1884 and 1958 replacements of the originals. However, the window frames themselves may be original. All windows are rectangular, and filled with elaborate stained glass in a geometric lancet pattern. The only alteration to the exterior appears to be the filling in of a centered door on both side elevations and the introduction of sash windows in their place. Covering the eastern two bays of the south facade is a one-story shed-roofed partially enclosed brick covered walkway. On the interior, box pews feature paneled ends, and the octagonal pulpit is also paneled. The altar area is enclosed by a balustrade. The roof of the nave is barrel vaulted, supported by Doric columns. The pews appear to be the only interior finishes remaining from the 1799 church. The remainder of the interior has been restored to its 1884 appearance. The church is surrounded by a graveyard, enclosed by a low brick wall.

Although the interior of St. George's has been extensively altered from its original appearance, the exterior remains largely the same. The aesthetically pleasing setting of this charming building draws numerous visitors to this site throughout the year and it is perhaps one of the best known Protestant churches in Southern Maryland. When first established in Poplar Hill Hundred, lay readers conducted the weekly services. In 1650 the Reverend William Wilkinson became the first rector; it is reputed that Wilkinson was, in fact, the first Anglican minister in Maryland. Although another Anglican church was erected for Poplar Hill Hundred about two years before the first church at this site, its location was inconvenient to many parishioners and it was soon moved to St. Mary's City. It is therefore generally believed that St. George's is the site of the oldest Anglican church in Maryland whose parish is still in existence.

Family buried at the St. George's Episcopal Church cemetery include: