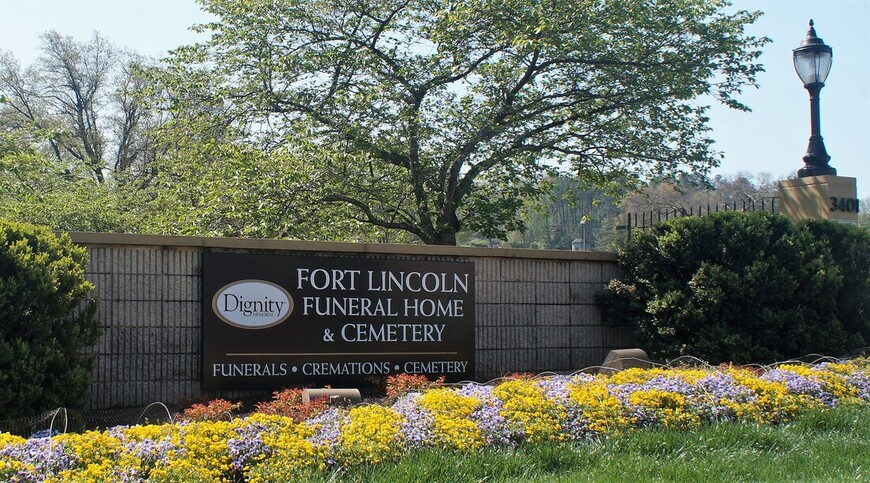 Fort Lincoln Cemetery was chartered in 1912 by an act of the Maryland General Assembly; the 176-acre property was historically significant long before it became a cemetery. The Old Spring House, the oldest-standing structure on the grounds, was built in 1683. During the War of 1812, the famed Battle of Bladensburg happened here, and the property was an active part of the Bladensburg Dueling Grounds until 1820.

The first burial occurred in 1921. In 1929, the Little Church was built for committal services. With stained-glass windows depicting Shakespeare’s “Seven Ages of Man,” the building won an architectural award from the Board of Trade.

At the cemetery entrance, a floral clock was built in 1938. The clock contains a face of 32 feet in diameter, of which 28 feet is planted surface. It runs using a highly accurate Seth Thomas electronic timekeeping mechanism. The numbers are 21 inches high and 12 inches wide. The minute hand weights 300-350 pounds, and is 18 feet 4 inches in length. The hour hand weights 200-250 pounds, and is 14 feet 9 inches long.

Horace Peaslee also designed Fort Lincoln’s Little Church, which was built in 1929. The church, designed in the form of a cross, contains eight stained-glass windows portraying the seven ages of man as depicted in Shakespeare’s play “As You Like It.” The rear cloister of the church contains individual or family vaults for those who prefer entombment. There is a small bell tower with a bell to the left of the junction of the cross. The sanctuary, with its manual organ, serves for baptisms, weddings, anniversaries, Sunday concerts, and funerals. The lower chamber of the church is the crematorium.

The Spring House is the oldest standing building on the cemetery property. Tradition says the structure was built in 1683, when one of the earliest colonists built his home on a nearby hillside. However, the Spring House was probably not constructed until around 1765 after George Conn (a pointer and mason) purchase the land.

The Community Mausoleum was built in 1947, and sits just behind the Little Church. A wing was added in 1952, which has a small 100 seat chapel. Above the front entrance is a beautiful carving that depicts the Biblical story of Abraham entombing his wife, Sarah. The stained-glass windows of the chapel include colorful scenes from Arthurian literature and the "Quest for the Holy Grail." Other stained-glass windows through the mausoleum were created by Henry Lee Willet, and depict Christian stories and children’s poems. Opposite the second floor entrance is a monument made of Indiana limestone commemorating the August 24, 1814, Battle of Bladensburg stand by the Marines under the command of Commodore Joshua Barney. Near that mausoleum sits a replica of the Liberty Bell.

There is a 13-foot high bronze statue of Abraham Lincoln sitting in thoughtful meditation, looking thin and war-torn. Created by Andrew O’Connor, a noted Lincoln scholar and sculptor. It was commissioned by the Rhode Island Lincoln Memorial Commission for the State House, but they were never able to raise enough funds to pay for it. The status sat in a foundry until 1947, when it was placed at Fort Lincoln Cemetery.

A 1790 Act established that 40 boundary markers be placed at the District of Columbia/Maryland line to set aside land as the seat of government. The survey was begun by Major Pierre Charles L’Enfant, and completed by Major Andrew Ellicott. After the Virginia sandstone markers were placed in 1792, a variation in the original land survey was detected to discover the Northeast Number 7 boundary stone was wholly on Maryland land. The Daughters of the American Revolution placed an ornamental iron fence around this stone and others around 1916 to protect them from damage.

The older half of Fort Lincoln Cemetery contains traditional grave sites with headstones and a few private mausoleums. The newer sections are laid out according to the memorial park concept. Here, religious and historical gardens contain markers set flush to the earth.

A 190-foot section of Battery Jameson, a Civil War fortification built in 1862, still stands on the Fort Lincoln Cemetery grounds. The cannons that were originally installed in the fort are no longer there, but 12-pound boat howitzers designed by John A. Dalgren, known as the father of American Naval ordinance, cast around 1863, were placed on the Fort Lincoln grounds in 1921.

Fort Lincoln Cemetery land was home to the great “Lincoln Oak”, a majestic tree under which President Abraham Lincoln met with troops during the Civil War. In 1991, lightning hit and killed the nearly 500-year-old tree. Cemetery management planted a new white oak at the site and installed a plaque commemorating the original tree.