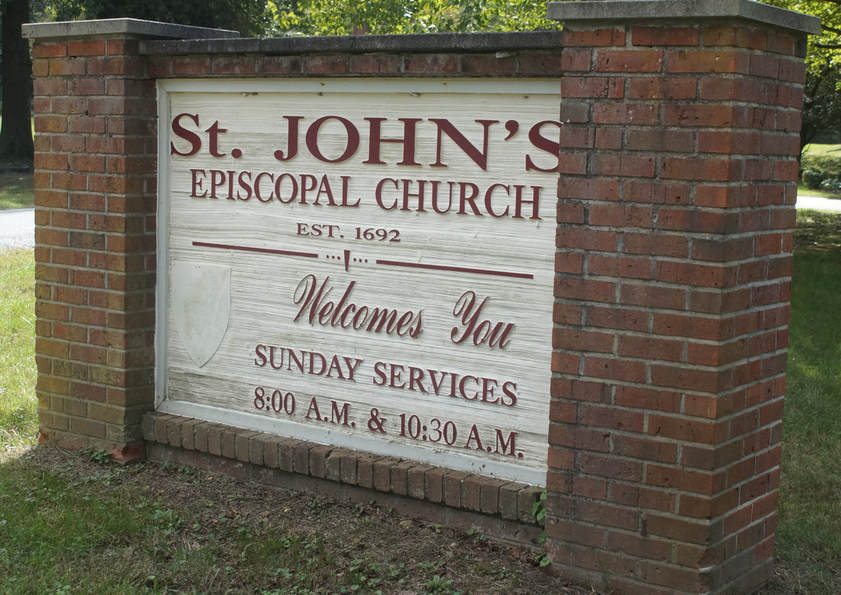 King George Parish was established in 1692 as one of the original four parishes of the Episcopal Church in Maryland. Known at that time as Piscataway Parish, its boundaries were Mattawoman Creek, the Charles County line to the Pennsylvania line, the Pennsylvania line to the Potomac River, and the Potomac River to the mouth of Mattawoman Creek. On January 30, 1693, a vestry first met at the home of Col. John Addison at Broadcreek to build the first church, which was completed in 1695. Thirteen years later, a second frame church was built, its dimensions being 50 ft. by 24 ft. with a 13 ft. gallery. In 1722, the first brick church building was built, costing 24,000 lbs. of tobacco, with John Lane contracted to erect the walls and John Radford, carpenter, to supply pews and build the gallery. In 1766, the vestry voted to contract with Mr. Clelland to rebuild the church, adding 14 ft. to the width by moving the south wall and 12 ft. to the length by moving either the east or west end wall. The building specifications called for a rather thorough remodelling to give the building its present appearance. The remodelling, however, was evidently regarded as inadequate, since the following year the vestry decided to offer Mr. Clelland additional payment to take down the walls and construct a new building meeting the previous specifications.

Throughout its history, St. John's (Broadcreek) avoided being torn assunder by the controversies that divided many churches. Although Rev. Henry Addison was forced to leave the country in 1775, he had never had to preach with loaded pistols on the pulpit as Rev. Boucher reportedly did. Even the Civil War did not split the church; the attitudes of Dr. John Bayne are representative of the mediating attitudes of parishoners. Although he protested admitting runaway slaves through Union lines, Dr. Bayne served as a surgeon with the Union Army, and remained a friend of Lincoln's Secretary of War, Stanton, as well as of Samuel Cox of Rich Hill (Port Tobacco) who assisted John Wilkes Booth escape from Washington.

A large cemetery surrounds one of the original building. One of the earliest tombstones is dated 1760; and burials include Revolutionary soldiers and patriots. Due to the area flooding due to nearby development, many tombstones can no longer be found or are readable.