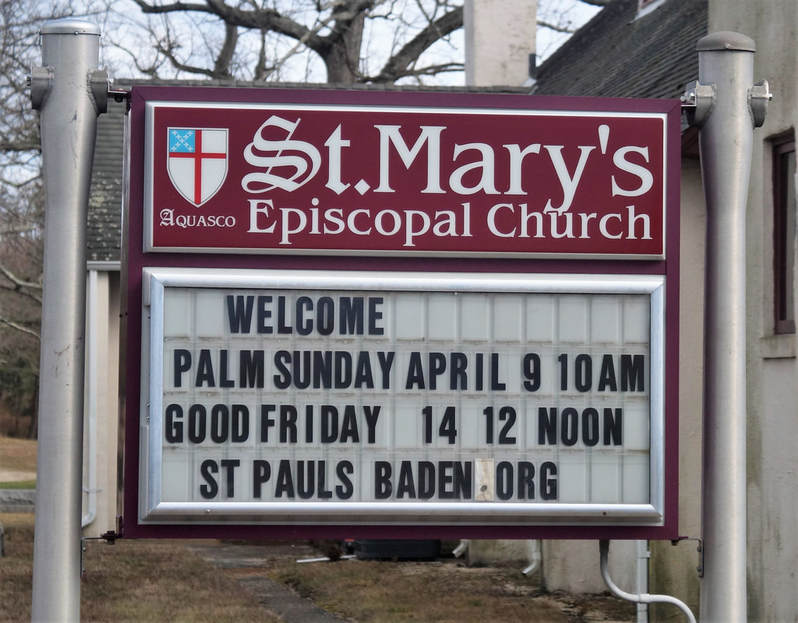 The St. Mary's Episcopal Church is on a corner lot, Aquasco and St. Mary's Church Roads. The church is a two story, rectangular gable roof structure of stucco-covered frame with a three story rectangular bell tower with a crenellated cornice on its west gable end. The three bay west (main) facade has entrance in a central gable roof projecting bay, through a pointed-arch door. A triple lancet stained glass window is centered on the facade above the entrance bay. The bell tower at the north west corner of the facade has corner buttresses, a circular window on west, north and south facades at second level and a pointed-arch louvered openings on all four facades at third level. The roof slopes to one story level on the north and south facades, and has a deep overhang. There are three gable roof donners at second level. On the south bay of each facade is a one-story projecting gable roof, two-by-two-bay transept arm, with vertical panels of half-timber decoration centered in the gable peak.

The land for the chapel and the original cemetery was donated by R.W. Silvester. The Morton and Thomas families donated land later for an addition to the cemetery and for the old rectory. The cemetery surrounds the church on both sides and in the rear of the church. It is fenced on three sides, and entered through a wrought iron gate. Grave dates range from Mary Thomas in December 1851 through the present. It is shaded by large fir and hardwood trees.