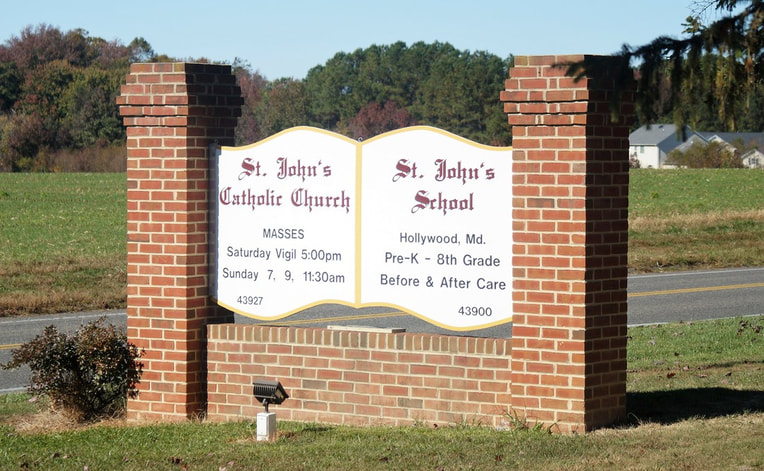 Tradition holds that the first church named in honor of St. John Francis Regis located in what is now Hollywood, Maryland, commissioned by Fr. Francis Pennington and built in 1690. This first church structure was considered a of log cabin-like structure with clay and mortar daubed between the logs to keep out the elements. This small, rustic house of God rested on a foundation of fieldstones and bricks placed at the four corners of the building. It was situated by an artesian spring, about 180 yards to the northeast of the present church. The first church building served the parish for almost 100 years.

The growth of the parish and the condition of the original church led the Jesuits in Newton, then under the leadership of Fr. James Walton, to undertake the building of the second St. John’s. The new church was constructed around 1780, on a parcel of land about 100 yards to the west of the first church. The new building was much larger than the original, and the quality of the building materials and the construction were similarly a great improvement over the original church. The foundation was formed of tightly packed stones brought by farmers from their fields. This foundation was so well made that it outlasted the second church itself.

Around 1875, a 15-foot addition was built at the west end of the church to provide more seating for the congregation. Two galleries were also added to the sides of the church above the windows, and spanning the length of the church on each side. A bell tower was erected at the east end of the building behind the sacristy and the priest’s rooms. These were the last recorded major improvements to the second church.

At the end of the 19th century, it was clear that the population of St. John’s parish had outgrown the second church. Furthermore, additional space was needed immediately outside the church to accommodate the horses and buggies increasingly being used to transport the faithful to services at St. John’s. Although funding a new church building would prove difficult for the parish, a beginning for the third and current St. John's was made through the generosity of Mr. and Mrs. Martin Yates, who donated 13 acres of land just to the south of the old church cemetery as a site for its construction. The foundation was to be located on a slightly elevated spot, allowing for drainage on all sides.

Construction of the new church, including planning and building, would take almost 2 years to complete. Under the guidance of Fr. Charles K. Jenkins and Fr. William J. Richley, the project was started in 1896. Joseph Milburn of Leonardtown was given the commission to build the new St. John’s Church. All the oak and pine timbers for the building, which came from the forest of the Townsend Estates a few miles south of Leonardtown, were cut at a modern sawmill. With a large assembly of parishioners, neighbors, and friends in attendance, the newest St. John’s Church was dedicated on July 17, 1898, by Bishop Alfred A. Curtis on behalf of Cardinal Gibbons. The old church building continued to serve the parish as a church hall well into the 20th century, until its deteriorating condition made it a hazard to children in the community. This forced Fr. Johnson, then pastor of St. John’s, to have it demolished.

Within weeks of the dedication, a major storm damaged the new church. Most of the ceiling plaster was knocked down, and much of the church furniture consequently ruined. The ceiling was not replastered; instead, a make-shift wood frame was nailed to the studding over the remaining original plaster. It was then covered with a tin ceiling that lasted for about a quarter of a century.

In November 1905, Fr. Clement S. Lancaster, who served as pastor at St. John’s from 1904 to 1906, arranged for the installation of 19 stained glass windows in the new church. The designs of the windows showed a variety of geometrical designs and a number of different religious symbols, including the Alpha and Omega, Chalice and Host, INRI as inscribed over the cross of Christ, a crown and cross, the Sacred Heart bound with thorns, and roses, among others.

On September 28, 1922, Father Joseph M. Johnson arrived as the new pastor of St John’s Church. Fr. Johnson was a native of St. Mary’s County, coming originally from Morganza, Maryland. Unlike his predecessors, who had served as pastor for only 1-2 years, Fr. Johnson’s tenure would last for 31 years. Fr. Johnson undertook the reclamation of the overgrown church grounds, clearing 17 acres over several years of effort. During his stewardship, Fr. Johnson saw to the renovation of the church building proper, the interior of the church, and the physical plant of the church.

In 1954, the first of several shrines to be built on the grounds of St. John’s was established. This was Our Lady of Grace Shrine, located just to the south of the church and adjacent to the cemetery. This shrine, to honor Our Blessed Mother in the Marian Year of 1954, was damaged by a falling tree during a severe storm in 1997, and restoration work was completed in 1998. In 1955, a grotto was dedicated to Our Lady of Sorrows on the north side of the church. This grotto includes a statue of the crucified Christ with His Blessed Mother, which was a gift of St. Peter’s Church, Jersey City, New Jersey. In 1987, a shrine dedicated to St. Joseph was constructed near the northeast corner of the church. In 1998, a Memorial, in the form of a gravestone, was set up outside the southwest corner of the church to commemorate the late Mother Teresa’s opposition to the evil of abortion.

Most recently, the parish constructed a new parish hall at the east end of the church, between the church and St. John’s school. This facility, approximately 16,000 square feet in size, provides modern and spacious accommodation for student athletic and cultural events, as well as expanded educational activities, including CCD, parish social functions, meetings and events of parish societies and organizations, among other activities.