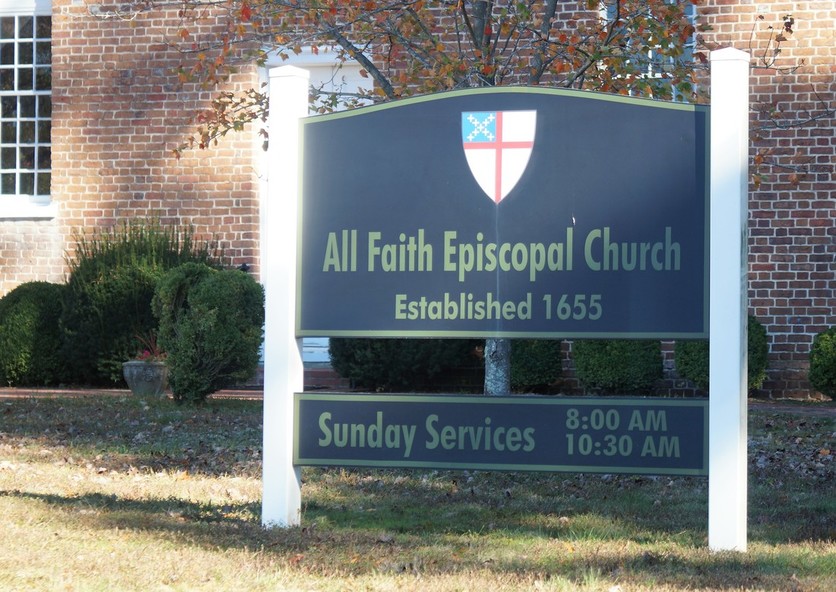 All Faith Church is oriented on an east/west axis, the church is on a three-acre tract overlooking the rural two lane road and a surrounding cemetery. Both the church and the cemetery are contributing resources. The property also contains a noncontributing parish hall and bell tower -- both located to the southeast of the church.

All Faith Parish is fortunate in that most of its ancient records have been preserved. The first entry in these old records has to do with the establishment of the Parish by the Colonial Legislature of Maryland, being number 12 of the Establishment.

Like many old churches, the original structure was built of logs. It was located on the site of the present building and was erected around 1655. This building was rebuilt in 1693 and finally replaced by the present structure in 1767. The church is a one story, brick building with a wood shingle, gable roof. The building exhibits a cross-axial plan with a rear chancel. A small vestments room, added on during the 19th century, is attached to the building's southeast corner.

The church is constructed of brick laid in Flemish bond with a molded brick watertable. Typical of Episcopal churches of the period, the primary elevation is situated on the building's west side. Here, a series of three, symmetrically aligned, compass-headed bays pierce the facade. The bays consist of a centrally located set of paneled French doors flanked on either side by a 12-over-16, double-hung window. Perhaps the most distinctive component of this elevation is a three-part Palladian window composed of two smaller 6-over-9 double-hung sash that flank a larger 18-over-16, single-hung sash. A small fluted keystone highlights the top of the central window's architrave. This elevation is further embellished through a pair of cornice returns as well as modillions that lie just under the eaves.

The north and south sides of the church reveal an identical rhythm of openings. Symmetrically aligned, the bays consist of a centrally located set of paneled French doors flanked on either side by 18-over-16, single-hung sash windows. The east gable end is pierced by a circular stained-glass window, although the original compass headed window opening is discernible in a brick patch in this area. The vestments room, located at the church's southeast corner, is constructed of brick laid in a 5-to-1 common bond and features a low hipped roof. A segmental arch 6-over-6, double-hung sash window is situated on the addition's south side and an exterior door is visible on the west side.

Although the pews were replaced, the interior retains much evidence of the church's original cross-axial plan, including sunken aisles and a remarkable series of fluted, square columns with Ionic-order capitals, essentially aligned with the building's side aisles. A plastered, barrel-vault ceiling springs from the capitals. Two identical, but opposing, winder stairs permit entry into the church's gallery that extends along the entire west end of the building, while a chancel lies at the east end.

A raised dias, approached via two steps, precedes the chancel. Raised above its original height probably in the late 19th century, the chancel is demarcated by a reproduced chancel rail and a communion table. As mentioned above, the large compass headed window once located in the eastern end of the church was replaced in the 1950s with a smaller circular window filled with stained glass. The window on the south side of the chancel was replaced by a door that now permits entry into the small vestments chamber.

Family buried at the All Faith Episcopal Church cemetery include:
m. = maiden name.