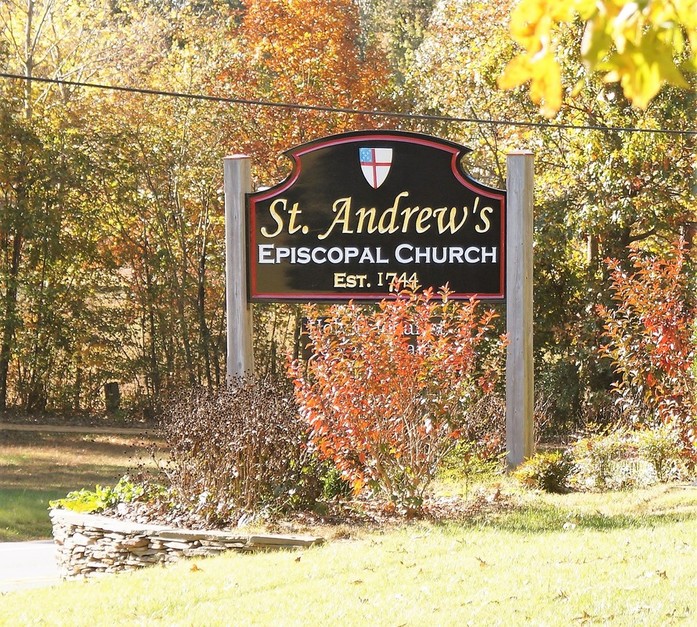 St. Andrew's Episcopal Church stands today little changed from its original appearance in 1767. The church was built in the Georgian style with classical motifs, by William Boulton who crafted the woodwork at Sotterley Plantation. Of brick, Flemish bond construction, it is a rectangular block measuring 55 by 40 feet with the facade on the west. This elevation, known as one of the most unusual in Maryland, has a centered door and flanking windows set within a recessed portico. Directly above, at the attic-gable level, is a pedimented Palladian window. At each corner of this same elevation stands a two-story brick tower with stubby pyramid roof (the towers were never finished), brick quoins at the ground-floor level and arched statuary niches at both levels.

The balconied interior has a barrel-vaulted central ceiling supported by fluted columns of the Ionic order and flanked by flat-ceilinged side aisles, a scheme typical in 18th century St. Mary's County, but unique to southern Maryland. The finely carved altarpiece, also of the Ionic order, has a segmentally arched broken pediment supported by fluted pilasters and frames an elaborate reredos painted by John Freich in 1771. The nave is divided by side aisles which are intersected halfway by a cross aisle. Other interesting interior features include the chancel rail, paneled wainscoting and original box pews.

At present, there are 316 marked graves in the church yard, but many more have been interned in the yard.  The first mention of burials at the Church yard occurs in April 1789 in the description of the duties for the new rector.  Church registries indicate that more than 620 souls have been buried in the yard.  Many of these graves now lost were marked with wooden crosses or carved cedar markers that did not withstand the elements of time.  There are veterans from every war fought including a Captain George Dent who served in the Continental Army and later as a Colonel in the War of 1812.

In 2003 the Parish underwent intensive restoration.  It was during this time that actual groundwork began for our Columbarium.  In November 2006, the columbarium was consecrated and the cremated remains of two parishioners were interred.

Family buried at the St. Andrew's Episcopal Church cemetery include: