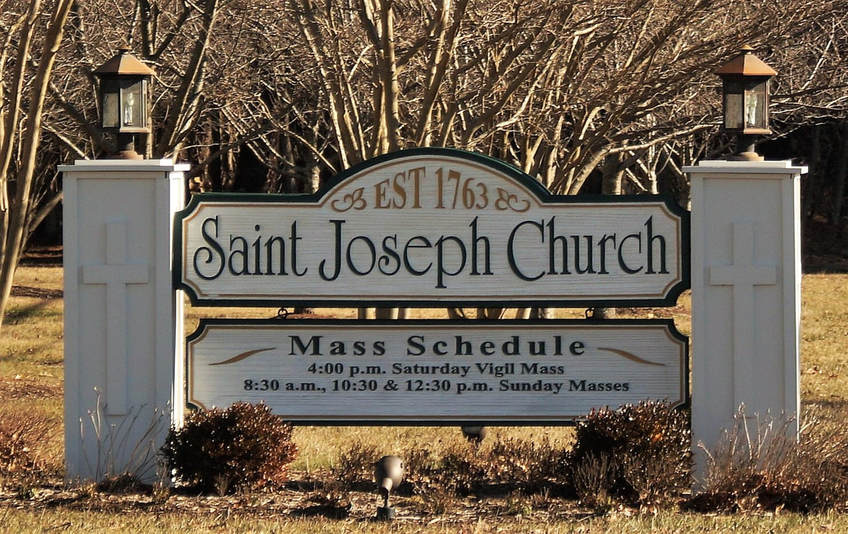 St. Joseph Parish in Pomfret, Maryland, was founded in 1763 by Father George Hunter, S.J.  Life for these early Catholics was very difficult; they were not permitted to practice their faith and were tormented unmercifully until 1777.  Manor houses were approved for housing the priest and chapels were permitted in cemeteries, solely for the purpose of conducting services for the dead.  In these difficult years, wealthier Catholics constructed an additional room onto their houses where Mass could be conducted; in more modest homes the Sacraments were offered in whatever space was available.  These homes where Mass and Catholic worship was active, but underground were known as "stations".  Surrounding St. Joseph’s area there were seven such stations.

The first chapel to occupy the present site was located approximately 100 yards northeast of the current church, and stood until 1835 when it was demolished due to deterioration. The second St. Joseph's Church was dedicated in 1849, and has, since then, served the congregation continuously. The building's original appearance has been significantly altered by the addition of a central frame bell tower in the late 19th century, and the addition of stucco exterior cladding. The interior, however, retains much of its original look, including its floor plan, galleries, shallow barrel-arched ceiling, and portions of its decorative woodwork. Although extensively altered in the 20th century, the church is among the best preserved mid-19th century religious buildings documented in Charles County.

Numerous locally prominent Charles County residents have been members or pastors of St. Joseph's congregation during its 236 years of service. These include Francis Xavier Neale, brother of Leonard Neale, the second Archbishop of Baltimore; and Maurice McDonough, an 18th century merchant who donated his fortune for the education of poor children in Charles County, and who is buried at St. Joseph's Church cemetery.

The economy of the area was historically based on the vast tobacco plantations which were run by slave labor.  About 30% of our current parishioners are descended from these slaves. St. Joseph’s architecture is typical of the simple lines of many 17th and 18th century Catholic churches in Southern Maryland with its white pews and slave balconies. Both before and after the Civil War, many of the white land owners deeded acreage to their freed slaves.  Unfortunately, some of the land was poor; in fact, St. Joseph’s church is built on the "Great Charles County Swamp."

The parish is also comprised of the mixed blood descendants of the Algonquin Indians who had numerous tribes including the Potomac and Piscataway Indians of our area. As early as 1639, with the arrival of the Ark and the Dove, many of their ancestors were converted to the faith. About 20% of our parish is comprised of these people of Native American heritage.

In addition, we still have parishioners who are descended from Dr. Samuel Mudd, from Mother Catherine Spalding, who founded the Sisters of Charity of Nazareth and from the family of Archbishop Leonard Neale.  The first Carmelite Monastery in the new world was established within what were then the boundaries of the parish; indeed the statue of St. Joseph beside the church in the prayer garden was originally within their cloister.

In 1849, the present St. Joseph’s church was dedicated.  In 1948, the parish formally began co-sponsoring Archbishop Neale School, making it the Catholic elementary school of our parish.  Priests of the Archdiocese of Washington were assigned to take over from the Society of Jesus in the 1950s and they continue to serve the spiritual needs of the parish community.  In the 1970s, 1980s and 1990s extensive restoration efforts were undertaken in the church.

St. Joseph’s predates the founding of our nation, and a walk through our cemetery shows family ancestries dating back through the centuries.  In recent times, the parish has seen a gradual influx of middle income families from other areas and is increasingly becoming a truly suburban parish while holding on to its rural historic charm.

Family buried at the St. Joseph's Catholic Church cemetery include: